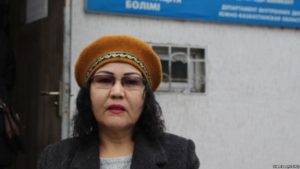 URGENT ACTION
CIVIL ACTIVIST DETAINED IN PSYCHIATRIC FACILITY
Ardak Ashym, a 52-year-old blogger and civil activist from Shymkent, south Kazakhstan,
has been detained in a psychiatric facility after being charged with “insulting a state
official, with the use of mass media” under Article 378 of the Criminal Code for her posts
on social media which criticize the government. Amnesty International considers Ardak
Ashym to be a prisoner of conscience.
On 15 March, police carried out a court-ordered search of blogger and civil activist, Ardak Ashym’s house and
took her for a psychiatric examination. They informed her that she was being charged with ”inciting social, national,
racial, class or religious discord” under Article 174 of the Criminal Code of Kazakhstan. The charges have since
been changed to “insult of a state official, with the use of mass media” under Article 378 of the Criminal Code; it
has not been specified who the official Ardak Ashym is accused of insulting is. On 27 March, a judge at Abay
District Court in Shymkent ruled in her absence that Ardak Ashym should be placed in a psychiatric hospital
pending trial because she has suffered from “episodic paranoid schizophrenia” since 2015 and that she was
purportedly “not in a condition to understand the danger to society of her actions”. The judge also stated that she
was under investigation for having published “various materials against the authorities on a Facebook page”. Ardak
Ashym only found out about this court decision on 31 March, when she was summoned to the police station for
interrogation and subsequently detained at the psychiatric facility. Ardak Ashym’s family were not allowed to see
her for three days following her forced institutionalization. On 12 April, the South Kazakhstan Regional Court
upheld the decision of the District Court and detained Ardak Ashym in the institution for a further month pending
trial. On 26 April, the Abay District Court in Shymkent extended her pre-trial detention for another month. The
hearing on the charges is expected to take place in early June in Shymkent. If convicted, the activist could face 75
days in detention and a fine of up to KZT 721,500 (US$ 2,200). Ardak Ashym’s family deny that she has any
mental health problems.
States have a responsibility to protect the right to freedom of expression, and as Ardak Ashym has been detained
solely because of the peaceful expression of her views, Amnesty International considers to be a prisoner of
conscience.
Please write immediately in Kazakh, English or your own language:
 Urging the authorities to immediately and unconditionally release Ardak Ashym, and drop all charges
against her, as her detention appear to stem solely from the peaceful expression of her views;
 Urging them, pending her release, to ensure that Ardak Ashym is granted access to her family and her
lawyer and, should she wish this, to an independent psychiatric examination.
PLEASE SEND APPEALS BEFORE 7 JUNE 2018 TO:
Prosecutor General
Kairat Kozhamzharov
14 Orynbor Street
Astana, 010000
Republic of Kazakhstan
Fax: +7 7172 506 402
Salutation: Dear Prosecutor General
Human Rights Ombudsman
Askar Shakirov
Dom Ministerstv, 15 podezd
Astana, Levy Bereg
Republic of Kazakhstan
Fax: +7 7172 740548
Email: [email protected],
[email protected]
Salutation: Dear Askar Shakirov
And copies to:
Minister of Foreign Affairs
Kairat Abdrakhmanov
ul. D. Kunaeva 31
Republic of Kazakhstan
Email: [email protected]
Salutation: Dear Minister
Also send copies to diplomatic representatives accredited to your country. Please insert local diplomatic addresses below.
Please check with your section office if sending appeals after the above date.
Твитнуть
Поделиться
Плюсануть
Поделиться
Отправить
Класснуть